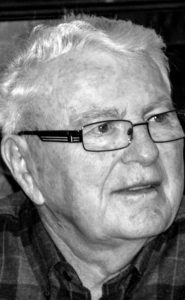 Mr. Marvin Mock of Lethbridge, beloved husband of Mrs. Ruby Mock, passed away at the Chinook Regional Hospital on Tuesday, October 18, 2016 at the age of 81 years. Marvin was born to Jacob and Bertha Mock in Medicine Hat, Alberta on May 25, 1935. Sadly Marvin’s mother passed away during Marvin’s delivery. Subsequently Marvin went to live with his grandparents, Christian and Pauline Elhart, who lovingly raised him in “the Flats” of Medicine Hat. As a youth, Marvin was very athletic and excelled in baseball, playing all positions. He also delivered the local newspaper, and worked at the Market Gardens. He worked a short stint at the CPR before embarking on a 41 year career at Canada Safeway, retiring as store manager in Lethbridge. In 1955, Marvin married the love of his life, Ruby Brost, and in 1963 they moved to Lethbridge where they resided until his passing. Marvin enjoyed camping, curling, woodworking and going for coffee with his friends. Most of all, he enjoyed spending time with his children and grandchildren. He is survived by Ruby, his wife of 61 years and his four children, Darryl Mock(Margot), Bruce(Diane) Mock, Gwen (Karl) Mielke, and Sheri (Brent) Meheden. He is also survived by his grandchildren: Kristi Mock, Bryce (Ashlan) Mock, Ryne Mock (Cassie), Toni (Ryan) Westerson, Alex Vanderaegen, Eric Meheden (Brianne), Todd Meheden, Jennifer (Anthony) Kudelik, Colten Mielke, and great grandchildren: Olivia, Natalie, and Bennett Kudelik. He is also survived by his 2 brothers: Clarence (Violet) Mock, and Leonard (Marg) Mock; Brothers in law: Lance (Olive) Brost, and Jim Brost. Sisters in law: Irene Saddler, Florence (Merle) Koenig, Shirley Elhart, as well numerous nieces, nephews and their families. Marvin was predeceased by his parents, his mother and father in law, Ida and Edward Brost, Allan Brost, Boyd Saddler, George Brost, Donald Elhart, and Gary Brost. A Funeral Service will be held at 2:00pm on Friday, October 21, 2016 at MARTIN BROTHERS RIVERVIEW CHAPEL, 610-4 St. S., Lethbridge, AB. A private family interment will follow in the Mountain View Cemetery. Flowers are gratefully declined. Those who wish, memorial donations may be made to the Canadian Diabetes Association, #204, 2323 – 32 Ave. NE, Calgary, AB T2E 6Z3; or the Heart and Stroke Foundation of Alberta, Box 2211, Lethbridge, AB T1J 4K7.