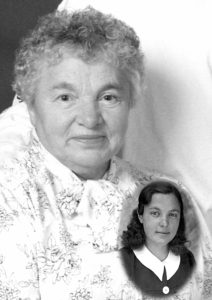 Our beautiful, dear Mother, Grandmother and Great Grandmother was born in the tiny hamlet of Salichowka, Barashivka Raion, Kiev Oblast in Ukraine on a wintery day in 1921. At the age of three, she lost her mother. A few years later, she was orphaned at the tender age of eleven, after losing her sister Pressa and father due to Stalin’s famine. Before that terrible time, as a little girl, she would often travel through the orchards to visit her Baba and other relatives in the neighboring village. Every Sunday the family would walk to church through the forest village paths, have dinner with friends, and catch a ride home in a horse drawn wagon. Many good times were spent sitting around the table singing songs and telling folk stories. Her father had raised her to be a gentle, kind and forever-loving child. After the loss of her father, with the help of her extended Jewish family and friends in her neighborhood, she became a brave, determined teenager who worked during the day and went to school during the evenings. She managed to get a good job working in a factory as a machinist. Due to the metal filings irritating her lungs from working the lathe, she was sent on a health retreat to Odessa on the Black Sea to recuperate. There, she attended many operas and purely enjoyed her well-deserved paid holiday. She returned to work and managed to rent an apartment on Pushkinskaya Street in Kiev. She was blessed with the most beautiful voice and had a repertoire of hundreds of songs, mostly folk songs. Her teenaged friends would often ask her to sing for them. Life was good now, but soon was interrupted by the Second World War. After the German invasion, she had to leave her apartment and job and was sent to work in a factory in Germany and then to a farm in Austria where she met Iwan (John), the love of her life. They were soon married and had their first child. Iwan thought he was rescuing her to a better place by emigrating to Canada in 1951. However, after experiencing the finer side of life in Odessa, it was quite a shock to come to a little farm near Picture Butte, Alberta. Having gained strength from her years of adversity, she continued to work hard and raise her two daughters. Songs were plentiful, along with weekly baked bread and wholesome farm meals. She tended to a huge garden, and home canning was a usual duty, along with caring for all the farm animals which came of every variety. Her favorite was her milk cow Bapsta who would come when called to be milked in the early morning hours before Mom went to work in the field. The neighborhood children used to line up many times at her door when the aroma of potato pancakes would call them. Fish was plentiful at her home, along with the traditional Ukrainian cabbage rolls and varenykies. Mom was able to understand six different languages. She enjoyed poems by Alexander Pushkin and Taras Shevchenko. Often she would recite them to us. At the age of 45, she unfortunately became widowed and again had to face adversity, raising her daughters through their teenage years on her own. She managed to find jobs working in a bakery and then later with the school district, retiring when she was 63 years of age. She spent her retirement years knitting, gardening, and cooking for family gatherings, as well as enjoying holidays with her children and grandchildren. She lived a simple life. She would spend her mornings conversing with the robins, afternoons petting bumble bees while picking weeds, and evenings harvesting potatoes, tomatoes, and cucumbers for supper. In her latter years, she especially enjoyed the company of Sally and leaving peanuts on Candy and Allen’s deck for the blue jays. Her wisdom and sense of humour were remarkable, and she even coined words of her own like when she wanted to take a short nap and would call it a snap! Her daughters were loved dearly and her grandchildren and great grandchildren were sparkles in her eyes. She loved them with all of her heart. Unconditional love, generosity, gentleness, and forgiveness were what she lived by. Her spirit is strong and vibrant; everyone felt her presence when she walked into a room. Declining health over the past year or so had led her to be hospitalized, and tenaciously, she continued to fight for life. She would do anything and everything for her children, even if it meant to suffer in a hospital bed. She broke it to us gently… rarely did she complain; gracefully, she let go; and peacefully, she parted into the arms of God on October 14, 2016. She carried us through all of the seasons, and the seasons are so much more beautiful because of her. God’s grace shines through her and about her. We will miss her immensely… Mom (Baba) was predeceased by her husband Iwan (John); granddaughter Charlene Willis; great grandson Samuel Willis. She will be lovingly remembered by her daughters Candice (Allen) Willis, Mary (Reid) Seibert; grandchildren Callen Willis, Chad Willis (Lindsay) and their children Declan and Emmett, Laurie Chinn (Jamie) and their children Kennedy and Rylan. A Funeral Divine Liturgy will be held at SS. PETER AND PAUL GREEK CATHOLIC PARISH, 639 12 B Street North, Lethbridge AB, on Tuesday, October 25, 2016 at 10:00 a.m. with Father Gary Sedgewick celebrant.