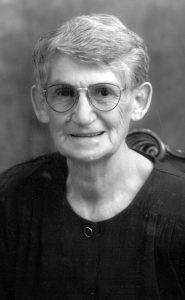 It is with great sadness that we announce the passing of our loving Mother Stella Doris Zabel, beloved wife of the late Lawrence Zabel on Friday October 14, 2016 at the age of 87. Stella was the first born of five, to Oscar and Violet Mead on June 22, 1929 in Gull Lake, SK.

Mom is survived by her children, son Ryan (Adriana) of Edmonton and daughter Shelley of Calgary. Step Grandchildren, Thais (Leo) and Victor, and three nephews, five nieces, one brother in-law and one sister in-law and many friends.

She grew up in the Trent area and went to the Trent School for grades 1-9. Mom went as far as she could with schooling, as there was no high school in the area where she lived. She worked as a waitress in Cabri for two years and then at the dry cleaners in Gull Lake for eight years.

On December 5, 1958 (the coldest day of the year) Mom married the love of her life Lawrence Zabel. They lived in Thompkins, SK until the summer of 1959 they moved to Medicine Hat, AB and in 1960 they moved to Lethbridge, AB where she made her home for 50 years. Mom moved to Calgary in 2012 to be closer to her children.

Mom stayed home and babysat the neighbor’s children until October of 1974 when she started working at the Lethbridge Regional Hospital. She worked there for 19 years. She then spent one year working at We Care. In October of 1994, Mom decided to retire and take it easy.

Mom always loved to cook, bake and can foods, there was always plenty of food to go around at her table. She made a lot of desserts. Everyone really enjoyed her butter tarts. Mom would always be out in the audience for our Christmas concerts and Kiwanis Festival or any sports we participate in. When she was working in the hospital some of her co-workers would call her the candy lady as she always had candy in her pocket. She loved to garden and grow her flowers especially her roses. Mom was a very loving, caring, and strong person who fought to the end. We will miss very much.

A Funeral Service will be held at 1:00pm on Saturday, October 22, 2016 at MARTIN BROTHERS RIVERVIEW CHAPEL.

Flowers are gratefully declined. Those who wish, memorial donations may be made to the Canadian Cancer Society, 317-10 St. S., Lethbridge, AB T1J 2M7 or to the charity of your choice.