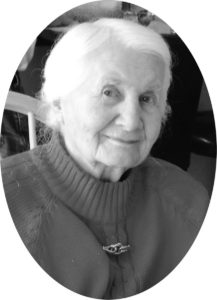 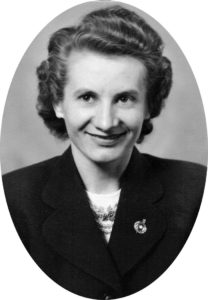 Olga was born March 21, 1919 in Switzerland and came to Canada with her family in May 1924 where they settled in Mountain View, AB. She lived in Mountain View until 1949 when she then went to Calgary to attend Secretarial school.

She obtained a position as office manager and accountant for Foothills Printers and her career there spanned over 30 years. She had an excellent memory especially for names, math and numbers. She was a valued employee.

Olga loved music and sang and participated in Operetta’s and road shows during her youth and early adulthood. She was an excellent seamstress but her greatest gift and passion was gardening. She won many awards, including one from the City of Calgary for her beautiful flower garden and pictures of her garden appeared in the Calgary Herald. Her flower and vegetable garden were a source of joy and beauty to her entire neighborhood, friends and family.

Olga was predeceased by her parents, Anna & Wilhelm, her brother Orson and sister-in-law Donna Weber and by several half siblings, nieces & nephews. She is survived by Orson & Donnas’ children, Don, Colleen, Stephanie Joyce, Doug, Jeanne and their families and half brother Fred’s children, Betty & Fred Jr.

At Olga’s request there will be no funeral service but a private family burial in Mountain View, Alberta.