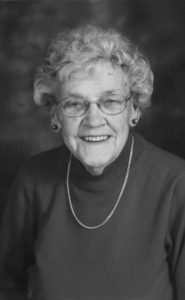 CHRISTINE FENTON, passed away peacefully at the Chinook Regional Hospital on Wednesday, October 19th, 2016 at the age of 89 years.

Chris was born in Govan, Saskatchewan in 1926, where she was raised and educated. She continued her education in Outlook, Saskatchewan. She then moved to Regina, where she worked for the Saskatchewan Wheat Pool, Otis Elevator and Tourism Saskatchewan, where she worked until she retired. Chris met and married “Brownie” in 1949 and they eloped to Minneapolis, St. Paul and returned to Regina, where they resided before Brownie passed away in 1997. Chis was an avid Saskatchewan Roughrider fan, never missing a game on TV. At one time, her and Brownie had season tickets. She moved to the View in Lethbridge in 2012, which she really enjoyed. She loved to curl, bowl and play cards. She was a bridge fanatic. Chris was a wonderful mother and grandmother and she took great pride in her grandchildren. She was a very social person with great humour, who loved to have people around. She will be sadly missed by her friends and family.

In memory of Christine, donations may be made to the Heart and Stroke Foundation, PO Box 2211, Lethbridge, AB, T1J 4K7.