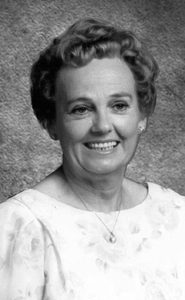 It is with deep sorrow that we announce the passing of VELMA AGNES LITCHFIELD. Left to remember her is her loving husband Gerald Wayne Litchfield; children: Mark (Jo-Lynn), Sharon (David), Gayle, and Bryan (Laurie). She has 18 grandchildren and 33 great- grandchildren with 3 more to be added to the family by the end of 2016. Velma was predeceased by her son Daryl in 1985. She was also predeceased by her parents Georgina Wilson Still Austin and Anthony Nelson Austin of Perth Western Australia and in-laws Ernest and Minnie Litchfield of Raymond Alberta. Velma worked for many years in the Lethbridge Community College Bookstore and later at University of Lethbridge bookstore. In the late 1970’s she began working in the cash office at Sears and once she turned 65 she retired but still enjoyed visiting weekly with the friends she made while working there. Velma joined The Church of Jesus Christ of Latter-day Saints in Australia on September 6, 1952 then travelled to United States and Canada where she met Gerald. They married July 15, 1954 and spent the next 62 years of their life raising their family. She served in many positions, but her favorite calling was “Akela” of a cub pack of 35 youngsters. The Funeral Service will be held on Saturday, November 5, 2016 at 11:00 a.m. at The Church of Jesus Christ of Latter-day Saints, TAYLOR STREET CHAPEL, 221 North, 400 West, Raymond, with Bishop Wallace Tollestrup officiating. Friends may meet the family on Friday, November 4 from 7:00 to 8:00 p.m. at CHRISTENSEN SALMON GENERATIONS FUNERAL HOME, 703-13 Street North, Lethbridge, or prior to the funeral service on Saturday from 10:00 to 10:45 a.m. at the church. Interment to follow in the Temple Hill Cemetery, Raymond. In lieu of flowers, donations may be made to the General Missionary Fund.