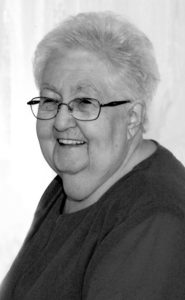 Mrs. Eva Wilson of Lethbridge, beloved wife of the late Mr. Robert “Bob” Wilson, passed away after a short illness on Sunday, October 30, 2016 at the age of 84 years. Eva was born in Athabasca, Alberta in 1932. She moved to Lethbridge in 1949. She worked for Broder’s Cannery until she married in 1952. She then became a Homemaker and stay at home mother. Her hobbies were sewing, knitting, crocheting and embroidery work. She was a great listener and even her daughter’s friends went to her to talk and get advice. Eva is survived by her daughters Kathy McNicol and Susan (Loren) Enzie; and her son by choice Ian McNicol (Frank Pictras); grandchildren Darryl (Meribeth) McNicol, Donald McNicol, and Edward (Megan) McNicol, and 4 great-grandchildren; sisters Laura (Frank) Johnson; sister-in-laws Doreen Potvin, Mary Potvin, Janet Johnson; brother-in-laws George (Barbara) Wilson and William (Rose) Johnson; as well as numerous nieces, nephews and their families. Besides her loving husband Robert “Bob” Wilson, Eva was predeceased by her parents Romeo and Millie Potvin; brothers Robert Potvin, Arthur Potvin; sister-in-law Lillian Allen; brother-in-law Ron Johnson; son-in-law Douglass McNicol. A Private Family Graveside will be held at the Mountain View Cemetery.