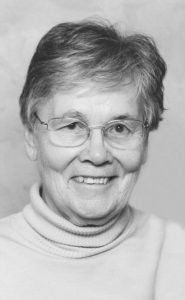 KATHLEEN VIOLET ALICE HOFFMAN, beloved wife of the late Henry Hoffman, passed away with her family at her side on Sunday, November 6th, 2016 at the age of 87 years.

Besides her husband Henry, Kathy was predeceased by her husband Dennis Perry, her husband Bernard Breland, brothers Cyril Bedford and Robert Bedford and her sister Monica (Bedford) Waller, and step-daughter Jenny Michaud.

Kathy was born and raised in England, where as a girl she endured WW2. She began her career as a seamstress in England before immigrating alone to Canada in June of 1950. She lived in Toronto and Banff before settling in Calgary. She married Bernard Breland in 1960, had one son, Alfred, and was widowed 3 years later. She then married Dennis Perry in 1965 and had another son, Michael, and step-daughter Valerie. Widowed again in 1972, she found love one more time with Henry Hoffman in 1973 and were married for 40 years. Henry had two children, Jenny & Wayne.

Kathy loved the out-doors, animals and her hobbies included baking, knitting, crocheting, quilting and crafts. Henry & Kathy spent a lot of time at the Senior’s Centre carpet bowling, where they made good friends. Family was everything to Kathy, especially her grandchildren. Kathy was a dedicated volunteer with the Lethbridge Humane Society. She was quick to dance or laugh but her ability to fully enjoy life was hampered in her later years by Alzheimer’s disease.