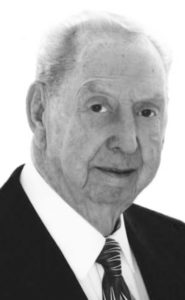 WATSON ELMER RIRIE passed away surrounded by his family on Sat., Nov. 5, 2016. He is survived by his wife of 59 years Barbara Thelma Jacobs and children Carolyn Flexhaug (Miles), Edmonton, AB, Robert (Tiffany) of Boise, ID, and Donald (Kari) of Oregon City, OR. He is also survived by his siblings: Ruth Rice (Wes), Norma Woolley (Donald), Joan Karren (Tom), Jacqueline West (Allen), and Jimmy Ririe (Toni). He is predeceased by his parents Morris Elmer Ririe and Margaret Annie Watson and sister Mary Margaret Blumell (James). Watson and Barbara have 17 grandchildren and nine great grandchildren.

Watson was born on March 17, 1929 in Magrath, AB. Watson was raised in Magrath and after graduating from High School he served a mission for the LDS church in Holland.

On October 25, 1957 he married Barbara Thelma Jacobs in the Cardston Temple. Watson subsequently graduated earning his Masters Degree in Industrial Education from BYU.

He taught school in Cardston and at Magrath High School where he worked for 26 years. He was a sports fan and avid supporter of the Magrath Zeniths and BYU sports teams. Watson loved to farm and had a passion for growing and maintaining a beautiful yard and garden. He served his church in various capacities, as a Bishop, in a Stake Presidency and as a temple ordinance worker.

The family would like to thank Dr. Ken Dahl, Dr. Aaron Low and the staff of the Raymond Hospital for the generous and kind service given to Watson. Friends may meet the family at the Church on Friday, November 11th, from 7:00-8:00 p.m. or from 10:00-10:45 a.m. prior to the service.

The Funeral Service will be held at the Church of Jesus Christ of Latter-day Saints, Magrath Stake Center, on Saturday, November 12th at 11:00 a.m. Interment to follow in the Magrath Cemetery.

One Condolence for “RIRIE, Watson”