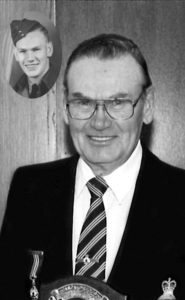 Mr. William “Bill” Liggett, beloved husband of Mrs. Molly Liggett, passed away at the Chinook Regional Hospital on Monday, November 7, 2016 at the age of 91 years. Bill was born on July 14, 1925 in Indian Head, Saskatchewan. He enlisted in the RCAF in January 1944 and after discharge, he enlisted in the Army and was assigned to the infantry until the war ended. He then worked as a fireman for CP Rail before becoming a gas and propane truck driver for 77, Gulf Canada and Superior Propane. He used his trucking as an excuse to have coffee and lunch at the many farmers he delivered fuel to. He was a loyal member of the General Stewart Branch of the Legion and was a member of Gabriel’s Angels until his passing. He enjoyed many nights and weekends playing cribbage and having morning coffee with his friends and as he would say “solving all the problems of the world”. Bill is lovingly remembered by his wife Molly; daughter Valerie (Leslie) Wingerter; grandchildren Christine (Roman) Sizer, Sharla (Sean) Bort, David Wingerter as well as 3 great grandchildren Ellie Bort, Claire Bort and Phineas Sizer. Bill was predeceased by his parents William and Esther Liggett as well as siblings Beth, Stanley and Donald Liggett. Family and Friends are invited to a Celebration of Bill’s Life at 1:30pm on Saturday, November 12, 2016 at the ROYAL CANADIAN LEGION, 324 Mayor Magrath Dr. S., Lethbridge, AB. Memorial donations in Bill’s honor can be made to the Royal Canadian Legion Poppy Fund, Dominion Command, 86 Aird Place, Ottawa, ON, K2L 0A1.

One Condolence for “LIGGETT, William “Bill””