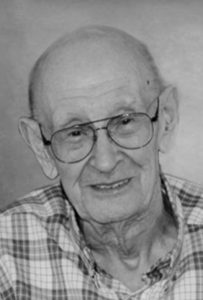 PETER “PIET” VAN SLUYS passed away peacefully at the Providence Care Centre in Calgary on Tuesday, November 8, 2016 at the age of 91 years.

Piet was born in ‘s-Heerenhoek, Zeeland in the Netherlands on August 3, 1925. He married Charlotte Kaat in January 1951. In June 1953 they immigrated to Canada along with their oldest son Dick. Piet became a journeyman welder; residing in Fort Macleod and later in Lethbridge.

Relatives and friends are invited to meet with the family at CORNERSTONE FUNERAL HOME, 2800 Mayor Magrath Drive South, Lethbridge, AB on Friday, November 18, 2016 from 6:00 to 8:00 P.M.

A Funeral Service will be held at CORNERSTONE FUNERAL HOME, on Saturday, November 19, 2016 at 1:00 P.M. with Pastor Hans Overduin officiating. Interment will follow at Mountain View Cemetery in Lethbridge.