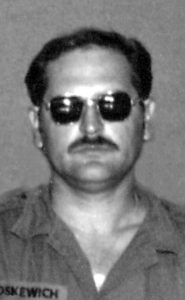 John A. Koskewich of Waterton Park passed away suddenly on November 10, 2016 at the age of 65 years. He was born and raised on the family farm in Del Bonita. He joined the Canadian Armed Forces in 1973. He had 2 daughters he adored and then moved back to the family farm in 1983, He finally achieved his dream of living in Waterton in 2003. He was fond of telling people that he had traveled all over the world and ALWAYS came back to Waterton, God’s country. John A. is survived by his Father Alex and 2 daughters Alexa Cheri & Kathryn Roberta; his grandchildren Joshua Bram Koskewich, Alyssa Cheyenne Florence, Roelie Dannan Mari; his younger brother Darrel and his family. As well as his large extended family and friends. John was predeceased by his Mother Florence and his Grandparents. A Graveside Service will be held at 2:00pm on Friday, November 18, 2016 at MOUNTAIN VIEW CEMETERY in Lethbridge. A Memorial Service will follow at MARTIN BROTHERS RIVERVIEW CHAPEL, 610-4 St. S., Lethbridge, AB. His daughter is planning a plaque dedication in Waterton Park; details will be announced next spring. Flowers are gratefully declined. Those who wish to honour his memory are asked to make somebody smile. John always believed everyone should laugh and smile more.