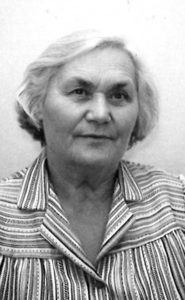 Mrs. Maria Sipiora (Krawczyk), beloved wife of the late Stanislaw Sipiora, passed away at Blue Sky Lodge in Lethbridge on Friday, November 11, 2016 at the age of 91 years. Maria is survived by her daughter Barbara (Stan) Mozgala and three grandchildren Margaret (Keith), Elizabeth (Jesse) and Viktoria, and one great-grandchild Declan. Maria was born March 25, 1925 in Lany near Krzemieniec, Eastern Poland and moved with her parents, two brothers and two sisters. She was deported to Syberia for hard labour, after World War II she was back to Poland and started her own family. In 1990, Maria came to Canada and started a new life where she was very happy and her passion included gardening and flowers.Maria will be dearly missed by her family and her friends. A Prayer Service will be held at 7:00pm on Friday, November 18, 2016 at MARTIN BROTHERS RIVERVIEW CHAPEL, 610-4 St., Lethbridge, AB, led by Father Lucas Drapal. A Funeral Mass will be held at 1:00pm on Saturday, November 19, 2016 at OUR LADY OF THE ASSUMPTION CHURCH, 2405-12 Avenue South, Lethbridge, AB with Father Lucas Drapal, celebrant. Interment to follow in the Mountain View Cemetery.