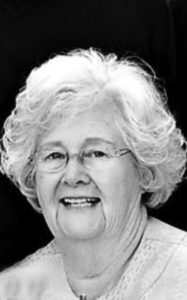 THELMA SHEFFIELD MILNE, beloved wife of John Milne, passed away peacefully in Cardston on Tuesday, November 15, 2016 at the age of 87. She is survived by her three children Gordon (Hollie), Robin (Blair) Goates, and Maralyn (Scott) English; her sister Maralyn Dileandro; her brother Dwayne (Janice) Hall; her son-in-law Vern (Judy) Swanson; her grandchildren and great- grandchildren. She was predeceased by her daughter Elaine Swanson.

She has left a legacy of faith, hard work, determination, grace and kindness. She loved people and had many lifelong friends. Her children and grandchildren have been influenced by her good example. She served on Cardston Town Council and as Mayor. She lovingly served her church in many capacities including as a Relief Society President, and with her husband when he was Mission President and in the Cardston Temple Presidency.

The Funeral service will be held at The Church of Jesus Christ of Latter-day Saints, Cardston Alberta East Stake Center on Saturday, November 19th at 2:00 p.m. Friends may meet the family from 1:00 to 1:45 p.m. prior to the service. Interment will follow in the Cardston Cemetery.