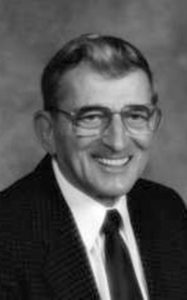 BRUNO LUIGI CHISTE passed away peacefully on Monday, November 14, 2016 at the age of 91. Bruno is survived by his beloved wife, Maria (Marie) and their three children Adele (Clarke) Hunter, Karen (Dave) O’Dwyer and Gary (Diane) Chiste. He is also survived by nine granddaughters, Andrea (Mike), Diana (Komie), Renae (Casey), Paula (Adam), Erin (Mike), Lauren, Leah, Sarah, and Michaela. Bruno loved to laugh and play with his eleven great grandchildren, Emmett, Haddie, Sydney, Graham, Dylan, Ellie, Norah, Aida, Russell, Rhys, and David. He is also survived by his cousin, Lino Chiste and numerous nieces and nephews. He was predeceased by his parents Adamo and Elena, his brother Joe, and his sisters Lillian and Mary.

Bruno was born on March 7, 1925 in Commerce, Alberta and was raised on a farm outside of Diamond City. He married Marie on November 15, 1952. In addition to farming in Diamond City, Bruno worked as a steam engineer at Purity Dairy and later at Palm Dairy. He ended his career on a tractor working on the grounds crew at the University of Lethbridge.

While Bruno was hardworking, he was always young at heart and loved to have fun sometimes at the expense of those around him. He had many creative talents that allowed him to play any instrument he could get his hands on, sing or whistle any tune, or share secret messages with his family with his dazzling ability to mirror write. Throughout his life he was resourceful and was able to fix or build anything. His creations will be treasured by his family.

A Funeral Mass will be Celebrated at OUR LADY OF THE ASSUMPTION CATHOLIC CHURCH – 2405- 12th Ave. South, Lethbridge, AB on Thursday, November 24, 2016 at 2:00 P.M. with Father Jack Bastigal celebrating. A Private Family Graveside Service will follow.

In lieu of flowers, donations may be made to the Alzheimer’s Society of Alberta and Northwest Territories or a charity of your choice.