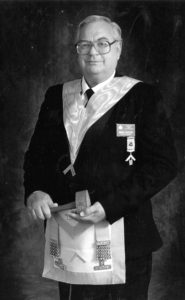 Mr. Bert Edward Denholm Baker of Lethbridge, formerly of Edmonton, beloved husband of Mrs. Heidi Baker, passed away on Friday, November 25, 2016 at the age of 77 years. Bert was a proud member of several Masonic Lodges and affiliate groups. Besides his loving wife Heidi, Bert is survived by his beloved daughter Cathy Livingstone and husband Art; and his wonderful grandchildren Connor, Devin, Amelia, and Benjamin; as well as his beloved son James Baker; sister-in-law Brigitte; mother- in-law Margot Sziegaud; niece Loree Lehanky; nephews Jim Jr, Garry, Kenny and Bobby Baker, Brent Lehanky, Hardy and Christopher Hall; as well as many cousins and dear friends. Bert was predeceased by his parents Bill and Franes Baker; his sister Barbara (Paul) Lehanky; and brothers Jim (Connie) Baker and Alex Baker. A Celebration of Bert’s Life will be held at 3:00pm on Saturday, December 3, 2016 at THE COAST HOTEL & CONFERENCE CENTRE, 526 Mayor Magrath Dr S, Lethbridge, AB T1J 3M2. Donations may be made to the Shriner’s Hospital for Children Canada (1003 Decarie Blvd, Montreal, Quebec H4A 0A9)