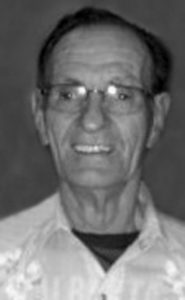 Mr. Wilfred “Aubrey” Borley of Lethbridge, passed away suddenly at the Chinook Regional Hospital on Saturday, November 26, 2016 at the age of 79 years. Aubrey was born March 24th, 1937 in Swan River, MB to parents Cecil James and Edith Doreen Borley. He spent many years in Magrath, Alberta where he raised his family before moving to Lethbridge in 1994. Aubrey worked many years at Tanco in Magrath and worked at the Exhibition Grounds in Lethbridge for several years until he retired. Aubrey was a beautiful dancer and was a member of the South Country Jamboree Society at the Legion. His passion was finish carpentry & wood working creating projects big and small. He also enjoyed sewing and upholstery. Aubrey Borley is survived by his 1 daughter Shelly Ann Kramer (Rod Kramer) of Cochrane, AB and 1 son Richard Wayne Borley (Manuela Borley) of Victoria, BC; grandchildren Mason Fredrick Kramer, Cole Aubrey Kramer & Victoria Paige Kramer; his special friend Ruth Liverseed; 3 sisters Muriel Bettger, Iris Ramsay & Irene Kusz; 3 brothers Robert Borley, Wayne Borley & Ben Borley; as well as numerous nieces, nephews and their families. He is pre-deceased by his son Eric Daniel Borley; his parents Cecil James and Edith Doreen Borley; and his sister Myrtle Bilodeau. Family and friends are invited to pay their respects between 11:30am and 12:30pm on Saturday, December 3, 2016 at MARTIN BROTHERS RIVERVIEW CHAPEL, 610-4 St. S, Lethbridge, AB A Funeral Service will be held at 12:30pm on Saturday, December 3, 2016 at MARTIN BROTHERS RIVERVIEW CHAPEL, with Reverend Glenda Wert, officiating.