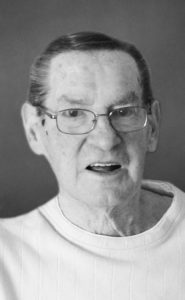 ROBERT KLUCZNY, beloved husband of Patricia, of Lethbridge, AB, passed away at the St. Michael’s Health Centre, Palliative Care Unit on Saturday, November 26, 2016 at the age of 82 years.

Besides his loving wife, Robert is survived by their children: Kelly Kluczny (Larry Ivan), Scott Kluczny and Bryan (Stacey) Kluczny, all of Lethbridge; grandchildren: Chanelle and Adam (Katie) Clampitt , Nicholas and Alexander Kluczny as well as one great-grandchild, Avarie.

He was predeceased by his parents, Hazel and John, brother Eldon, sisters Donna and Joan and nieces, Sherry and Juanita.

Robert was born and raised in Lethbridge. He left home at age 19 to join the Canadian Army then upon return, worked as a surveyor. Robert met Patricia Chisholm shortly after returning home from the Army in 1958. They were married in 1960 and started their family in 1961. He joined the Canadian Army Reserves for a brief time then did various work until becoming self employed with his own business in the early 70’s. In 1983 he worked at College Ford and remained there until his retirement in 2003. During his time there he became famous for his “scoopisms” which earned him the nickname “Scoop”; an endearment which stayed with him his entire life.

As a young man he enjoyed playing hockey and progressed to fastball into adulthood. Robert loved cars, especially Ford-built vehicles with his favourite being his Lincoln, and took great pride in cleaning and polishing them. During the summers he liked sitting on his deck with a beer, listening to music by Floyd Cramer. Robert liked to golf and was a Hurricanes hockey fan. During his retirement years, he enjoyed taking “Buffy” for walks, watching his grandkids play their sports, watching classic Clint Eastwood and Charles Bronson movies and visiting with his great-granddaughter Avarie. He was a spiritual man and an active member of his Knights of Columbus Council.

Robert will be remembered by his family and friends for his sharp wit and great sense of humour. He was a devoted husband, father, loved brother, uncle, grandfather and great-grandfather.

One Condolence for “KLUCZNY, Robert”