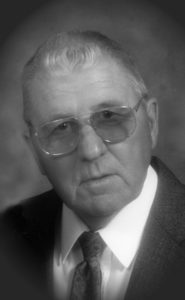 Jacob (Jack) Dyck of Coaldale, passed away peacefully at the Sunny South Lodge on Sunday, November 27, 2016, and went Home to be with his Saviour. Jack is survived by his wife Lena, daughter Joyce (Bill) Birch, grandson Kristopher (Tori), granddaughter Stephanie, two great-grandsons; Justin and Jake (parents Bill and Steph Chamberlain), sister Lena (Peter) Krause, sister-in-law Tina (Roland) Dyck, sister-in-law Elizabeth Abrahams, and sister-in-law Florence (Henry) Abrahams. Jack was predeceased by his parents Nicolai and Maria Dyck, his son-in-law Bill Birch, his brother-in-law Peter Krause, his brother Roland, and his brother-in-law Henry Abrahams. Family and friends are invited to pay their respects between 6:00pm and 8:00pm on Thursday, December 1, 2016 at the MARTIN BROTHERS RIVERVIEW CHAPEL, 610-4 St. S., Lethbridge, AB.A Memorial Service will be held at 2:00pm on Friday, December 2, 2016 at the COALDALE MENNONITE CHURCH, 2316 – 17 St., Coaldale, AB with Pastor Lillian Thompson officiating. *Due to severe allergies, please refrain from fragrances at Jack’s Memorial Service.* For those who wish, donations may be made in Jack’s memory to MCC Alberta, #210 – 2946 – 32 Street NE, Calgary AB T1Y 6J7.