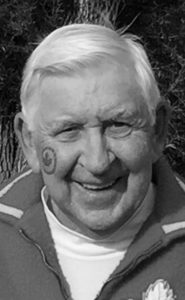 Mr. Logan Tait passed away on Monday, November 28, 2016 at the age of 82 years. Logan was born in Vancouver on November 21, 1934. He graduated from Kitsilano high school in 1952 and married Janet Warcup in 1954. Logan earned a bachelor of commerce degree from UBC, and went on to pursue his chartered accountant designation with distinction in 1960. Logan’s love of sports brought him to Lethbridge in 1960. He played basketball for the Lethbridge Broders and Lethbridge Nationals for three years. He won 14 Canadian championships as a player in soccer, basketball, and racquetball in addition to numerous Provincial titles. He represented Canada at five international basketball competitions including the Pan Am and World Games. In addition to being a player, Logan coached basketball at both the University of Lethbridge and Lethbridge College. Some of his career highlights included beating Russia at the World Games in Chile in 1959, finishing second to the US at the World Games in Manilla in 1963 and being honoured by having his picture on the cover of the Canadian Basketball Rule Book. He was always proud to wear his Team Canada uniform every Canada Day and still fit into it!! The passion and competitiveness Logan displayed as an athlete also served him very well in his professional career. He contributed to many successful business endeavours. He was an owner/operator of Schwartz Agencies from 1972-1981 and held numerous directorships and presidencies; serving as director of four different ATCO group companies and director of the Alberta Real Estate Insurance Exchange. He was president of Tait Management Services Ltd.; the Lethbridge and District Chartered Accountants Association; the Lethbridge, Alberta and Canada Real Estate Associations; and the International Real Estate Federation. Logan’s true business passion was his life-long commitment to serving the Hutterian Brethren, which he did with unparalleled effort and commitment from 1960 until his passing. He helped develop the rules of taxation that apply to Hutterite Colonies in Canada and constantly represented the Hutterite Community in business with a goal of fair and equal treatment. He was a tire-less advocate and developed a reputation as a trusted friend and advisor to Hutterites across the country. Logan and his family merged his accounting practice with MNP in 1999 and he leaves a passion for excellence and servitude to the Hutterian Brethren as a legacy to the firm and its team members. Logan was an active supporter of our community. He and his wife Jan were the first honourary chair couple of The U of L Festival of Art and Song. Logan was a former member of the Faculty of Management’s advisory council, and The U of L capital development campaign. In addition to supporting the U of L, he contributed to Lethbridge College as a member of their board of governors and their president’s advisory committee. Logan was also the president of the Henderson Lake Golf Club, the Chinook Club, the 1981 Alberta Summer Games, and former treasurer of the YMCA. Logan received many distinguished awards and honours. In 1986, he was awarded a Fellow of Chartered Accountants. In 1990, he was honoured as Canada’s Distinguished Realtor of the Year and in 1992 he received the Canada Commemorative Medal–125th Anniversary of Confederation in recognition of his significant contribution to compatriots, community and to Canada. Logan is an honourary life member of the Lethbridge and Canadian Real Estate Associations, and is recognized in the Lethbridge and Alberta Sport Halls of Fame. Logan was predeceased by his wife of 41 years Janet Tait, in 1995 and his second wife, Jo, in 2002; his parents Dr. Robert and Winnie Miller-Tait; two sisters Margaret and Winnie; and two brothers Bill and Bob. Logan will be dearly missed and fondly remembered by his partner of the past 13 years, Barbara Devine; his children and his grandchildren. He is survived by his two sons Bruce Tait (Donna) and Gord Tait (Michelle); and his daughter Jennifer Spriddle (Dean); along with his seven grandchildren Kelleen, Greg (Kassandra), Danielle (Jared), Dylan (Kendra), and Kevin Tait, and Devon and Lachlan Spriddle; and one brother Malcolm (Myrna) Tait of Scarborough Ontario; as well as numerous nieces and nephews. Logan was kind and he possessed a witty sense of humour. He was a good friend to many and he exemplified true sportsmanship. Logan often summed up his attitude with a 10 word, 20 letter saying… “If it is to be, it is up to me.” A Celebration of Logan’s Life will be held at 11:00am on Monday, December 5, 2016 at the SOUTHMINSTER UNITED CHURCH, 1011-4 Ave., S., Lethbridge, Alberta, with Reverend James Grunden, officiating. A Private Family inurnment will be held prior in the Mountain View Cemetery. Those who wish, memorial donations may be made to Family Centre Society of Southern Alberta (Suite 225, 200 4 Avenue South, Lethbridge AB T1J 4C9) or to KidSport (1001 3 Avenue South, Lethbridge AB T1J 0J3)

One Condolence for “TAIT, Logan”