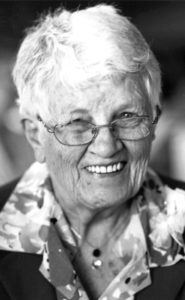 Mrs. Ada Van Egmond of Lethbridge, beloved wife of the late Mr. Reel Van Egmond, passed away peacefully on Wednesday, November 30, 2016 at the age of 87 years. Ada was born in Holland and as a young bride, she immigrated to Canada with her husband Reel in 1953. She had a great compassion and a loving heart, which she shared with her family and friends, as well as the people she cared for in her nursing career. She loved animals, and owned cats and dogs throughout her life. She even nursed a bird back to health one summer. Although she lived in a near silent world in her later years, her strength shone through her actions, words and sense of humour. Ada had a strong faith in the Lord, and enjoyed puzzling, reading and playing games with family and friends. She was a special Mom, Grandma, Great-Grandma and friend. She will be forever missed. She is survived by her three daughters Brenda (Gordon) Miller, Helen (Frank) Van Nistelrooy, Marion (Gary) Rupps; one son Brian (Lynn) Van Egmond; ten grandchildren Lana Miller, Tilly (Jeff) Quick, Jonathan Miller, Charity (Mike) Fleischhauer, Jenny Van Nistelrooy, Nikki (Herb) Arnott, Shawn (Michelle) Van Nistelrooy, Casey (Kim) Rupps, Courtney Rupps, Jason (Leah) Butz; fourteen great-grandchildren Jayden, Brody, Hadlee & Parker, Ainsley & Zoey, Jessa, Barret & Brance, Taylor & Jayden, Olivia, Emily & Brooklyn, Madie, Morgan, Harper and Sullivan, as well as family in Holland. A Memorial Service will be held at 11:00am on Tuesday, December 6, 2016 at ST. ANDREW’S PRESBYTERIAN CHURCH, 1818 15 Ave. S., Lethbridge, AB. In lieu of flowers, those who wish may make memorial donations to the Canadian Cancer Society, 317 10 St. S., Lethbridge, AB T1J 2M7