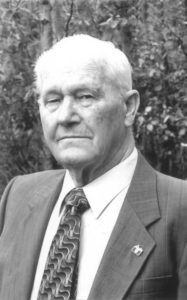 LYMAN RALPH GARNER, of Cardston, Alberta passed away in the Lethbridge Regional Hospital on Monday night, December 5th, at the age of 97. He was born on April 3, 1919 in Cardston, Alberta to Leonard Ralph and Vere Garner. He was the middle child with two older sisters: Afton (Louis) Skipworth and Fanny (Cleve) Fletcher and two younger sisters: Mary Wallace Baker and Ruth (Alf) Gibson.

Lyman spent his life farming and ranching in Hill Spring, Alberta. He love the outdoors, the animals and the beautiful area in which he lived. He especially loved Waterton and enjoyed many picnics with his family.

He was special and was loved by everyone who knew him. He was kind and loving and saw the good in everything around him; even through his trials he tried to remain positive and never lost his sense of humour.

Lyman served on the Board of Directors for the United Irrigation District from 1977-1980 and also on the Irrigation Council for the Province of Alberta for 13 years where he made many valuable contributions. He loved those he worked with and had wonderful opportunities while serving there.

He was a strong member of the Church of Jesus Christ of Latter-day Saints and served in many leadership capacities. He enjoyed working in the temple for many years. He loved the scriptures and had a strong testimony of the gospel. He was a compassionate man who took care of both of his wives in there ailing years. He was a loving husband and father who thought of others needs before his own.

He will be truly missed by his family and those who knew him.

A Funeral service will be held at The Church of Jesus Christ of Latter-day Saints, in Glenwood, AB on Tuesday, December 13, 2016 at 11:00 a.m. with Bishop Cam Francis officiating.

Friends may meet the family at the church from 10:00 to 10:45 a.m. prior to the service. Interment to follow in the Cardston Cemetery.

One Condolence for “GARNER, Lyman”