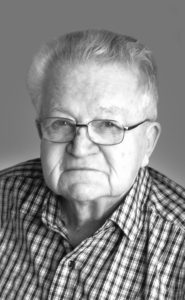 He is predeceased by his loving wife Mary, parents Andrew and Elizabeth Baczuk, sister Mary Suthons, father in law George Andrekson, mother in law Sarafima Andrekson, as well as numerous other close relatives.

Leslie Andrew Baczuk was born on June 22, 1931 at the family home in the 1-17 district southwest of Milk River. During his school years Les attended Bankview School. In June of 1956 Les married Mary Andrekson; the love of his life. He farmed alongside his Dad until 1963. After harvest he worked several fall campaigns at the Picture Butte Sugar Factory. Les & Mary continued to farm & reside on the family farm until August 1988. At that point Les became semi retired and they moved into Milk River. Les then drove School Bus for a number of years and was not quite ready to retire & was hired on by the Town of Milk River in January of 1997 to manage the Transfer Station until October of 2008. Then it was time for retirement mode. For numerous years Les was an active member of the Milk River Elks Club serving in various capacities. Les’s passions in life were farming & his grandchildren spending as much time as he possibly could with them.

Les will be greatly missed by all the lives that he had touched.

A Private Family Interment will be held at the Milk River Cemetery.

In lieu of flowers donations may be made to the: AHS-Milk River Tree of Hope: Box 90, Milk River, AB. T0K 1M0.