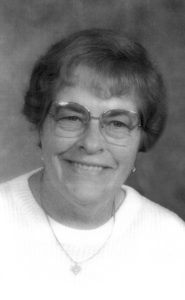 AGATHA “AGGIE” ABEN, beloved wife of the late Henry Aben, passed away suddenly at her home in Lethbridge on Wednesday, December 7th, 2016 at the age of 79 years.

She was predeceased by her husband Henry, her parents and granddaughter Olivia, as well as eight siblings.

Agatha was born in DeHoef, Holland on May 25, 1937. Her family immigrated to Canada in 1952 where she met Henry. They married in 1957 and together they lived and worked on a farm near Coalhurst, Alberta until 1972. They then moved to Lethbridge until the time of her passing. Aggie worked very hard raising four children and even found time to work outside the home at Zellers and McDonald’s.

She enjoyed gardening, sewing and many other types of needlework. Aggie’s most enjoyable thing to do was to bowl every Tuesday with her beloved friends. She was very generous with her time and energy and was always ready to help.

She was a long time member of the Assumption Catholic Women’s League and a past member of the Royal Canadian Legion of Coalhurst.

A Memorial Mass will be celebrated at OUR LADY OF THE ASSUMPTION CATHOLIC CHURCH, 2405 – 12 Avenue South, Lethbridge, AB, on Wednesday, January 4, 2017 at 11:00 A.M. with Father Kevin Tumback, Celebrant.

One Condolence for “ABEN, Agatha”