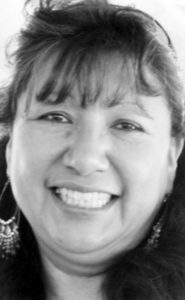 It is with great sorrow to announce the passing of the beloved JENNIFER COTTON, who passed away peacefully in her home on the Blood Reserve, surrounded by her family on December 10th, 2016, at the age of 51.

Jenn was born in Cardston, Alberta on February 22nd, 1965. She would, however, spend most of her childhood growing up in the Crowsnest Pass with her parents Norman and Lola Stelter. Growing up, Jenn took interest in cross country running, and curling, which she would play with family in her spare time. At the highlight of her curling career, she had won the Alberta Winter Games, earning her a curling scholarship to the Lethbridge Community College.

Soon after moving to Lethbridge for school, she met the love of her life, Oscar Cotton, whom she married in 1986. Together they raised three daughters in Lethbridge, later relocating to the Blood Reserve. Jenn was delighted to become a grandmother, first to Illiana in 2010, and again to Jacob in 2015. Family was a priority, and everyone remained very close, despite living in different cities. After settling in to start her family, Jenn took up playing Slo-pitch, and was very proud to have gone on to play in the SPN Nationals in 1999, in Abbotsford BC. She would later enjoy a new hobby in playing pool, of which she played in a league for many years, and enjoyed travelling with her husband and youngest daughter, Sam, to Las Vegas for the World VNEA Championships for many years. Oscar was a referee for the tournaments, with Jenn usually just a spectator, but she was very proud to been able to play with a team in the spring of 2016. At the time of her diagnosis of cancer, Jenn had been working with Canadian Linen in Lethbridge.

Jenn was a beautiful soul. To know her was to love her. Jenn was selfless, and always strived to treat others the way she would want to be treated. She was best known for her beautiful smile, her joyous laugh, and silly sense of humour. Jenn will be missed by everyone who was fortunate enough to have known her. She always remained positive and happy, even in illness. Jenn always had a smile that could cheer you up, even after the worst day.

Jenn was predeceased by her mother, Lola Stelter; her biological parents Donald Rides at the Door and Bertha Eagle Child; among others who are dearly missed.