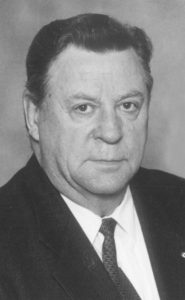 A giant oak has fallen. LEO DEAN GREGSON passed away on December 13, 2016 at at the age of 87 years. Dean was born in Cardston, AB on August 1st, 1929 to Thomas Thaddeus and Cordelia Smith Gregson. Dean married Olive Joyce Ellison on April 22nd, 1953 in the Cardston Alberta Temple. Dean and Joyce met playing high school basketball and have been together ever since. Dean spent the first fourteen years of his life living on the Blood Indian Reservation and always had a great friendship with the native people. He enjoyed basketball, motorcycles, ranching, farming and trains. Dean and Joyce always had an open door for anyone who needed a home. Most of all he loved the Gospel of Jesus Christ. Dean served a mission in Sydney, Australia before marrying Joyce and then they served missions together in Seoul, Korea and Nairobi, Kenya. His knowledge of the gospel blessed many lives and he wanted everyone to love it as much as he did. He was a bold proclaimer of the truth. Dean and Joyce were called as temple workers in the Cardston Alberta Temple in 1980 and served there for 34 years. He spent three years in the temple presidency and 33 years as a temple sealer.

Dean loved his family and would do anything to make their lives better. He is survived by his wife Joyce; children Michael Gregson Ryan (Sharon) of Burlington, ON, Deborah (Paul) of Yuba City, CA, Kathryn of Magrath,

and Joanne (Jim) of Cardston. He has 24 grandchildren and 54 great

grandchildren. Dean was predeceased in death by a son, Jeffrey Thomas Gregson. Friends may meet the family only on Monday, December 19, 2016 at the Legacy Funeral Home in Cardston from 7:00 to 8:00 pm.

The Funeral Service will be held at 11:00 am on Tuesday, December 20, 2016 at The Church of Jesus Christ of Latter-day Saints, Temple Street Chapel, Cardston, AB. Interment to follow in the Cardston Cemetery.