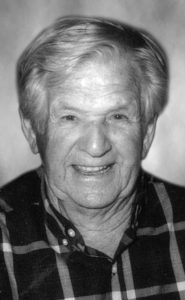 ERNST SIEBO KLOEPPER, of Lethbridge, beloved husband of Dora, passed away peacefully at the St. Michael’s Health Centre, on Wednesday, December 14th, 2016 at the age of 92 years.

Besides his loving wife of 68 years, he is survived by his children, Karl (Helen) Kloepper, Gesine Kloepper, Gordon (Donna) Kloepper, Harald (Kim Spencer) Kloepper, Alan (Angela) Kloepper and Irene (Rene) Kutzner. His memory is also cherished by his 14 grandchildren, 18 great-grandchildren and extended family in Germany.

Ernst was a kind hearted and humble man who made everyone in his life special, especially his family members. He would have a unique relationship with each of his grand and great-grandchildren. To say he was gracious would be an understatement, he was thankful for everyone and everything in his life and was sure to personally let those know who have made a difference in his life. He will be deeply and eternally missed for the life lessons he has taught and legacy he has left behind. A Celebration of Ernst’s Life will be held at CORNERSTONE FUNERAL HOME – 2800 Mayor Magrath Drive South, Lethbridge, AB. On Tuesday, December 20th, 2016 at 1:00 P.M. with Pastor James Krause officiating. In lieu of flowers and in memory of Ernst, donations may be made to St. Michael’s Health Centre – Palliative Care Unit, 1400 – 9th Avenue South, Lethbridge, Alberta, T1J 4V1. The family would like to thank Dr. Shakkoor and the St. Michael’s Palliative Care team, as well express a most sincere thank you to Nathan Praud who took exceptional care of Ernst.