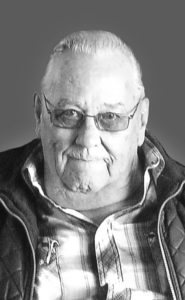 TONY KUNZ passed away with his family at his side at the Chinook Regional Hospital on Friday, December 16th, 2016 at the age of 82 years.

Tony was predeceased by his parents, three brothers & two sisters.

His love of life and people touched the lives of all those who knew him. His quiet courage, strength of spirit, creativity and sense of humour will be carried forward by those who knew and loved him. His greatest joys were camping, fishing & Crib. He would entertain with his guitar for many family and friends, as he played in a band for most of his life, and was even able to produce an album. Besides being musically inclined, he was a welder, ranch hand and most recently a pilot truck driver which enabled him to travel all of North America.

A Service of Remembrance will be held at CORNERSTONE FUNERAL HOME, 2800 – Mayor Magrath Drive South, Lethbridge, on Friday, January 6th, 2017 at 1:00 P.M. Following that, a Celebration of Life will be held at the Royal Canadian Legion in Fort Macleod, offering friends and relatives some time to share memories.

In memory of Tony, contributions may be made to the Heart & Stroke Foundation, PO Box 2211, Lethbridge, AB., T1J 4K7