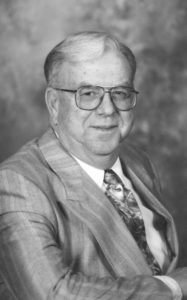 He was born on December 30, 1926. Angus was raised and received his education at Masinasin, where he farmed with his parents until 1974 when they sold their farm to Elmer Wehlage and moved to Milk River, because of his mother’s ailing health. Angus took very good care of his parents all their lives.

He worked for the town of Milk River for 7 years when he retired. While living in Milk River, Angus spent a lot of time on, and was very proud of, his beautiful lawn and flowers.

After his Dad’s death, he came out and helped David and Wanda with the farming and children, and enjoyed every minute of it. It’s still not clear whether he adopted them or they adopted him, but he was there for every single event and holiday.

Angus was Grandpa Angus to the Erickson kids. He did enjoy traveling every fall, with bus tours and a trip to Hawaii. In 1998, Angus met Peggy Miller and they were inseparable. Even after he could no longer help with farming, he and Peggy would drive out and park in the corner of a field at seeding, spraying and harvest to just check on progress. He and Peggy both moved to the lodge in 2008. He was heart-broken when Peggy was sent to Long Term Care in Raymond. Angus’ mobility got to the point he couldn’t walk and was moved to Extended Care in April of 2016 where he resided until his passing.

He was active in the United Church Choir and various projects. Angus received his 60 year medals and certificate with the Masonic Lodge in November with great pride, and he was very proud of the fact he was in the Mueller Band, where he played for many dances. Angus had the amazing ability to remember everything and everyone, right down to the dates. He was such a gentle soul and everyone that met him fell in love with him. Angus brought a calm kindness to anyone he met and he will be missed dearly.

He was predeceased by his parents Walter and Ina Erickson; his brothers Donald and Bill Erickson; and his sister Lillian and her husband Joe Szarko.