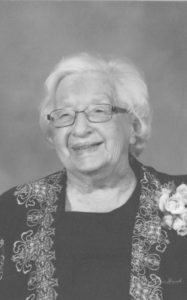 Mary was born in Moose Jaw Saskatchewan on July 23, 1916. Her and her family moved around frequently as her father was a minister of the church. She spent the first two years of her life in Dummer, Saskatchewan. The family lived there until they moved to Killarney, Manitoba. Mary received her early education in Glenboro, Elgin and Boissevain before attending Brandon College, graduating in 1938. Following graduation she worked for the Federal Department of Agriculture in the Seed Testing Lab in Winnipeg during the winter, alternating with the Entomology Lab in Brandon during their busy season in the summer. As war production was stepped up, Mary left the Seed Lab in favour of the Control Lab at the munitions plant in Transcona. It was during this time that Ed and Mary were married in 1943. Ed was still a medical student and Mary was making Cordite. After Ed was discharged from the army, the McTavish’s moved to Bonnyville, Alberta. During their time in Bonnyville their daughter Marilyn was born. The family returned to Winnipeg for two years and their final move was to Lethbridge in 1951 where they called Lethbridge home for over sixty years.

After the move to Lethbridge, Mary worked with Ed in his office as a receptionist, bookkeeper and lab technician until retiring to become a housewife.

Mary was a life member of the Southminster United Church Women – Chinook Unit, served on the Y.W.C.A. Board and was active in the University Woman’s Club and C.G.I.T. leadership. Travelling was a fun part of their life; be it by motorhome, plane, train or cruise ship.

Mary was a gentle, loving and caring sister, mother, grandmother and great grandmother who will be greatly missed by all of us.

One Condolence for “MCTAVISH, Mary”