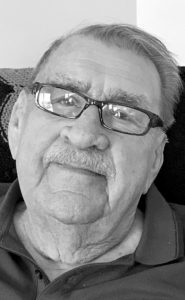 With heavy hearts, we share the passing of our Dad, and Grandpa, Andy Ponech. He slipped from this world with Brooklyn, the sunshine of his life, beside him, singing “Fly me to the Moon”. Dad left us peacefully on Wednesday, December 28th comforted by the presence of his beloved boys. Dad loved music, was a big Sinatra fan, and whistled his way through most days. He was very sociable and people were drawn to his charming, outgoing personality. He always had time to share a joke or two and was living proof that laughter was indeed the best medicine. Andy valued the lifelong friendships he made along the way, many of which were established while working in the service department of Beny Chev Olds. He was a popular well respected postman for the last 18 years of his working career and appreciated the recognition he received from the Post Master General and especially his customers. After retirement, Andy became restless and returned back to work in a small service station. Dad made an impression on many customers of Spotlight Esso and was given his second gold watch accompanied by the prestigious bird-man of the year award upon retiring yet again. Dad was an active member of the Legion, and served a term as Exalted Ruler of the Lethbridge Elks Lodge. He was especially proud to receive an honorary quilt for the years he served in the Royal Canadian Air Force during World War ll. Andy was above all a devoted family man. He met his “sweetheart” Evelyn at the Trianon ball room and they married in May of 1949. Andy and Evelyn raised a family of five children in Lethbridge and he cherished more than anything those times in his life when he was together with all of his kids. Andy and Evelyn thoroughly enjoyed their years of golfing, camping, fishing and playing card games together in retirement. Andy is predeceased by his wife of 66 years, Evelyn, son Darrell, and brother Nick. He is survived by his children Bev (Brian) Trone, Kathryn Ponech (Ron Davies), Ken (Kim) Ponech and Don (Heather) Ponech, brother Fred (Eileen) Ponech and sister Mary Kaszas. He also leaves several adored grandchildren, great grandchildren, and a beloved niece Su. The family would like to thank Dr. Sailendra and the nursing staff of unit 4C at the Lethbridge Regional Hospital for their care of Dad in his final days. At Dad’s request, there will be no service. Dad, the day has come when we have to say our goodbyes. Those of us left behind are broken hearted. It’s impossible to express how much you’ll be missed. “I’ll find you in the morning sun and when the night is new, I’ll be looking at the moon but I’ll be seeing you”…..rest in peace

One Condolence for “PONECH, Andrew”