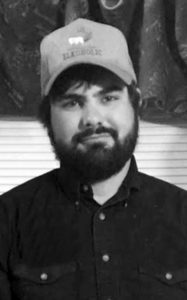 JAYDN LEE POWLESLAND, passed away in Calgary surrounded by his loving family on December 28th, 2016 at the age of 24 years.

He is survived by his wife, Madison; his two little boys, Camden and Stetson; his mother, Vicki; his siblings, Cory (Shelly), Brandy, Karli, Casey and Capri; nephews and niece, Daine, Brody, Summer & Luke. He is also survived by his grandparents, Floyd & Betty Stewart. Jaydn was predeceased by his father, Gene; brother, Darren; grandparents, Ray & Francis Powlesland.

Jaydn was always a dark haired happy boy who loved nothing more than being outside. He loved to hunt, ride horses and be on the farm. When he wasn’t outside he wanted to be playing cards. He loved to be with family and had such a deep contagious laugh. One of the greatest loves of his life were his two little boys. All he wanted to be was a dad and he was an amazing one. After the death of his father, he stepped up to care for his mom and younger brothers and sisters as well as his own little ones. Jaydn was loved by many and will be greatly missed by all who knew him.

The Funeral Service will be held at The Church of Jesus Christ of Latter-day Saints, Cardston Alberta Stake Center on Saturday, December 31, 2016, at 11:00 a.m. Interment to follow in the Aetna Cemetery.