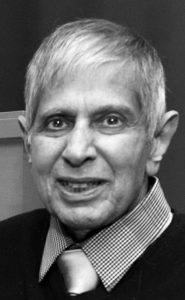 SYED MUDASSIR ALI, beloved husband of Cheryl Ali, passed away peacefully in his sleep on Saturday, December 31st, 2016 at the age of 74. He was the loving father of Jared (Tracey) Ali of Calgary and Farah (Denny) Mellott also of Calgary. Syed was loved and will be missed by his beloved grandchildren, Benjamin Mellott, Bradley Mellott and Aria Ali. He is also survived by his sisters Mahjabeen, Parveen (Inam) and brother, Shahid (Nigat) all of Washington D.C. and his sisters-in-law, Starr (Garry), Sandra, and Gay (Rob) along with many nieces and nephews. He was predeceased by his parents Yasin and Fatima, brother, Muzzamil, sister Hoorbano, brother-in-law Robert and in-laws, Susumu and Umeno Nakamura. Syed was born and raised in Pakistan, he lived a full and wonderful life, from his schooling in Birmingham, England to obtain his C.A. designation to relocating to Canada, where he had his accounting practice and raised his family in Milk River, Alberta. Relocating from Milk River to Lethbridge in 2004 upon retirement he and Cheryl had many great trips and created many lasting memories. Syed was respected and a friend to all who knew him. A graveside service was held with immediate family. In memory of Syed, and in lieu of flowers, donations may be made to the Canadian National Institute for the Blind at 15 Colonel Baker Place, Calgary, Alberta T2E 4Z3.

One Condolence for “ALI, Syed”