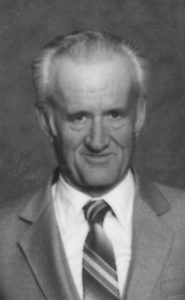 HENRY ENS, beloved husband of the late Susan Ens, of Lethbridge, passed away at the Lethbridge Adaptacare on Wednesday, December 28th, 2016 at the age of 89 years, just one day shy of his 90th birthday.

Henry was born in Felsenbach, Ekaterinaslaw, a region in the South of Russia and came to Canada as an infant in 1927. He was the fourth eldest of nine children born to Abram and Maria Ens. Once in Canada, they settled in Truax, Saskatchewan, where they spent nearly ten years, before moving to Coaldale in 1936.

Henry spent his early years working as a trucker and ranch hand then in 1966, went to work at the Lethbridge Research Station. Here, he worked until he retired. Henry met his wife Susan at the Research Station in 1974. They married in 1979 and resided at Sunnyside until her death in 2014. Henry and Susan were avid horse lovers and spent many years involved in the Percheron community, raising and showing their horses.

He is survived by his children: Lyn, Lori, Scott, David, and Karen; grandchildren: Jessica, Kelsey, Brady, Mikaela, and Riley, and great-grandchild, Chloe.

A Celebration of Life will be held at CORNERSTONE FUNERAL HOME – 2800 Mayor Magrath Drive South, Lethbridge, Alberta, on Monday, January 9th, 2017 at 2:00 P.M.