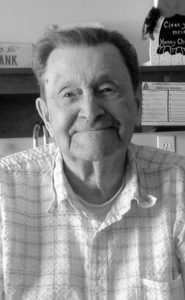 Our loving father Arthur “Frank” Johnson passed away at St. Therese Villa in Lethbridge on Tuesday, January 3, 2017 at the age of 83 years. Frank is survived by his loving wife of 60 years, Laura Caroline Johnson. Frank is also survived by his daughter Lori (Mike) along with their daughter Kayla, step granddaughter Krystal and her sons Liam and Brycen; son Tim (Kimberly) and their family, Everett (Brittani), Riley and Noelle. He is also survived by his sister Doreen (Robert deceased); brothers George (Barbara), Bill (Rose); and sister in law Mary (Arthur Deceased). Frank was predeceased by his sister Lil and brothers Bob (Eva deceased), and Ron (Janet). Dad had a very kind and loving heart. He will truly be missed by all that knew and loved him. A Private Family Service will be held at a later date which will be announced. The family would like to send out a heartfelt thank you to the staff and volunteers at St. Therese Villa for all the special care Dad received over his time there.