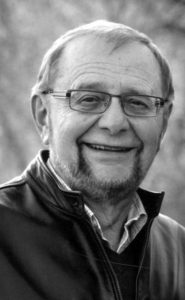 Mr. Steve Thomas Kaytor of Lethbridge, beloved husband of Christina Kaytor, passed away peacefully on Thursday, January 5, 2017 at the age of 72 years. He was born on March 5th 1944 in Lethbridge Alberta to the late Caroline and Tom Kaytor. He was one of three children and spent most of his childhood assisting his parents on a farm in Big Bend and later in Pincher Creek. In 1963, he married the love of his life Christina and together they had two awesome children Michael and Carrie-Lynn. Steve spent his early adulthood serving as a police officer in Cardston and Ponoka. Later in 1968, he started a career in the Canadian Food Inspection agency. Along with this he held various positions in the Union and received multiple awards and recognition. After his retirement in 2006, he enjoyed fishing, gardening and keeping an eye on the weather, Blue Jays, Oilers and Dolphins. But his greatest passion was being Papa to his grandkids. Besides his loving wife Christina, Steve is survived by his son Michael (Pam); daughter Carrie-Lynn (Shawn); grandchildren Hailey, Mikayla, Jenay and Hayden; sister Mary Kaytor; Auntie Isabel; Christina’s siblings Kathy (Ted), Marty (Joyce), Allan (Diane), Mary (Dennis), Ernie (Val); father-in-law Ed; as well as numerous cousins, nieces, nephews and their families. He was predeceased by his parents Caroline and Tom Kaytor; older sister Goldie and mother-in-law Dorothy. Vigil Rites (Prayers) will be held at 7:00pm on Monday, January 9, 2017 at ST. BASIL’S CATHOLIC CHURCH, 604-13th Street North, Lethbridge. A Funeral Mass will be celebrated at 1:00pm on Tuesday, January 10, 2017 at ST. BASIL’S CATHOLIC CHURCH, Father Kevin Tumback, celebrant. Cremation to follow. Flowers are gratefully declined. Those who wish, memorial donations may be made to Jack Andy Cancer Centre (1A129, 960 – 19 Street South, Lethbridge, AB T1J 1W5) or to St. Michael’s Palliative Care Unit (1400 – 9 Avenue South, Lethbridge, AB T1J 4V5).

Leave a Condolence for Carrie kaytor