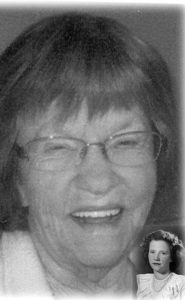 MARION ROGERS (nee DAVIS) OBER the wife of the late Norman Ober went home to be with the Lord on January 5, 2017. Marion was born on February 3, 1930 to John Rogers Davis and Mary Greig (nee Barrie) Davis and was raised on a farm near Coalhurst, Alberta where she also attended school. She loved to walk the coulees of the Oldman River and ride her horse as a child. She was the oldest daughter of 8 children and is survived by her brothers Roger (Joni) Davis of Coalhurst, Jim (Lynn) Davis of Coalhurst; sisters: Margaret (Peter) Dicker of Palmerston North, New Zealand, Eleanor (Wayne-deceased) Lloyd of Calgary, Beverly (Alvin) Bolokoski of Calgary, and Marlene (Clifford) Brown of Lethbridge as well as many nieces and nephews who called her “Aunty”. Besides her husband Norman, she was also predeceased by her sister Mary Patricia Davis, brother John Robert (Lorraine) Davis, niece Charlene Lloyd and nephew Jimmy Davis. Marion attended Olds Agriculture College where she acquired a diploma in Horticulture in 1951 and met her husband Norman Ober of Readymade, Alberta. They were married Jun 21, 1952 for forty years. She then spent the next 60 years of her life as a farmer’s wife; milking cows, feeding chickens, cooking (which she hated), cleaning (which she loved) and mothering 7 wonderful children (which she excelled at). She also enjoyed her love for horticulture by weeding, watering and tending her huge farm garden and flower beds every summer evening and cutting the grass on the driving lawn mower. Marion was also very active in the community and was a member of Readymade Farm Women’s Club, Kinette Club of Coaldale, Readymade 50 Plus Club and LSCO of Lethbridge. She loved sports, especially curling, golf and watching The Young and Restless and curling on TV. In her later years Marion moved to Garden View Lodge in Lethbridge where she enjoyed many social activities and outings. Marion was loved and will be missed by her four sons: Trent (Lian) Ober of Readymade, Brian (Lisa) Ober of Readymade, Tim (Betty) Ober of Airdrie, and Trevor (Kimberly) Ober of Calgary; three daughters: Gail (Colin) Smith of Loon Lake, BC, Carol Ober (Steve Chan) of Calgary, and Patricia Ober of Readymade; 17 grandchildren, 6 great grandchildren, and two on the way. Come Celebrate her life with Marion’s family and friends on Tuesday, January 10, 2017 at 11:00 a.m. at McKILLOP UNITED CHURCH, 2329-15 Avenue South, Lethbridge with Reverend Terry Shillington officiating. Hope to see you there! Internment to take place at Mountain View Cemetery. In lieu of flowers, memorial donations may be made to the Canadian Diabetes Association, 210 D-12 A. Street North, Lethbridge, AB T1H 2J1.