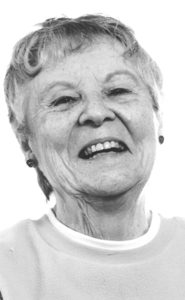 Rita Hugill (nee Lightbound) of Calgary passed away on Thursday, January 5, 2017 at the age of 84 years.

Rita was born and raised in Lethbridge, daughter of Jack and Margaret Lightbound. Following her marriage, she became a dedicated military wife and mother of four sons, travelling extensively throughout Canada and Europe for the next twenty-two years. Rita’s work life was primarily with the Bank of Nova Scotia in several locations across Canada. She was a very energetic and enthusiastic woman who enjoyed curling, bridge, knitting, reading, and gardening. Her biggest passion was her love for her Collies.

Rita is survived by sons and daughters-in-law, Terry and Leslie, Jeff and Jean, Rob and Joanne, and David; grandchildren, Scott (Chantell), Paul, Eric, Lauren, and Jordyn; and great-grandson Colton.