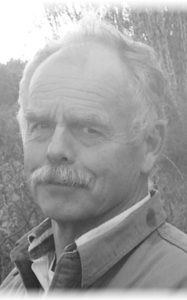 Ralph John Ketel, 62, of Peachland BC, formerly of Pine River Manitoba, and Picture Butte Alberta passed away on January 9, 2017 at Hospice House in Kelowna BC. Ralph lived a full, rich life. He was sorry to leave his wife, Gwynn, and family so early, but thankful to be at rest in the Lord.

Ralph was born April 4, 1954 in Smithers, BC, and shortly after his birth, his parents, John and Annie Ketel, took him along when the family returned to southern Alberta. Ralph had an energetic, inquisitive, friendly personality, enjoying visits from anyone who happened to stop by. Early in his life he developed a passion for horses; raising, and training many throughout his life. He always had a strong draw towards the cattleman life style – he drank his coffee black and wore his jeans blue. Ralph left high school prior to graduating so he could farm with his father. He was a life-long learner and became a very proficient dairy farmer and then cattle rancher. His cattle knowledge was well respected and was often called on by neighbors to help with difficult situations.

He kept a simple, profound relationship with his Almighty God, trusting in the glorious mystery of Jesus Christ as his Lord and Saviour which stirred his soul and gave him strength and peace.

His community involvement was appreciated wherever he lived. Ralph had a special heart for local youth. He was regularly involved as a leader in the local boys club, community youth group, high school rodeo, and as a Bible Camp supporter. Ralph loved the outdoors, the mountains, the prairies, the Manitoba bush, the wildlife and he shared it with family and friends through many hikes, skiing, miles of fencing chores, cattle working, trail rides, and by bringing home wildflowers for Gwynn.

Ralph and Gwynn were blessed with 38 1/2 years of marriage. Together they accepted the wonderful, sometimes challenging joy of raising a large family of six sons and one daughter.

The funeral service will be held at 2pm on January 15, at the Everden Rust Funeral Home in Kelowna, BC, and he will be laid to rest at Peachland Cemetery.

Memorial donations in Ralph’s name can be made to Maple Springs Bible Camp in Peachland, BC or the Bible camp of your choice.

Condolences may be sent to the family by visiting everdenrust.com

Leave a Condolence for Ken and Pamela Doleman