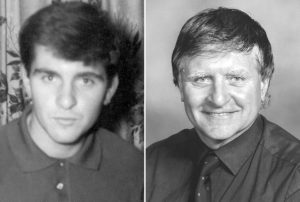 Ian Bernard McKenna passed away peacefully on January 16, 2017, at St. Michael’s Health Centre in Lethbridge. He was 73 years old. He is survived by his daughter, Deirdre (Jonathan), two sons, Brian (Anika) and Niall (Megan); five grandchildren, Isobel, Angus, Amy, Olivia and Alva; sister, Fiona (Gelt, as well many cousins, nieces and nephews in Ontario, Scotland and Ireland. He is predeceased by his beloved wife of 45 years, Dorothy, who passed away last April. Ian was born in 1943 in Dundee, Scotland to Margaret and Bernard McKenna. The struggles of working-class Dundee touched him profoundly and he dedicated his life and work to the ideals of equality and social justice. Ian completed a Master of Arts in Philosophy and Economics at the University of St. Andrews in 1961 before pursuing a PhD in Economics at the University of Dundee. He immigrated to Canada in 1970 and married Dorothy. He worked for the Ontario Department of Labour, and in 1974 acted as secretary for the Ontario Hospital Inquiry Commission. He served as a Collective Bargaining Officer for the Canadian Association of University Teachers (CAUT) and helped lead the first union drive of university professors across Canada. Ian, Dorothy and their children moved back to Scotland in 1977 where Ian completed his LLB and LLM in Law at the University of Dundee. Ian was then a Lecturer at the Faculty of Law, Lancaster University in England until, in 1985, he accepted a position as Associate Professor of Management at the University of Lethbridge. Here he taught labour relations, law and human resources management for 24 years until his retirement in 2009. Ian was a passionate advocate and defender of academic freedom and integrity. He served on the CAUT Academic Freedom & Tenure Committee, including a term as Chair. Ian’s interests and commitment to his community were limitless. He was a longtime supporter and served on the Board of the Southern Alberta Council of Public Affairs. Ian was a founding member of the Southern Oldtimers Football Association and mainstay of noon-hour soccer at the University. Music was a passion for Ian throughout his life and in his most recent years he was a member of the Lethbridge Golden Mile Singers. He will be remembered for his wit and generosity. The Family would like to thank the staff of St. Michael’s Health Centre for their compassion and care for Ian. In lieu of flowers, memorial donations may be made to St. Michael’s Long Term

Care Unit (covenanthealth.ca/donate), or volunteer your time to a community organization. A Memorial Service will held at 2:00pm on Friday, January 20, 2017 at MCKILLOP UNITED CHURCH, 2329 – 15 Ave South with Revered Trevor Potter, officiating.