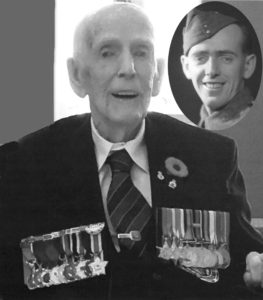 It is with great sadness and much love we say goodbye to our Dad, Grandpa, Great Grandpa and Great Great Grandpa, Irwin Kenneth McNeely. Irwin passed away at home surrounded by his family on January 17, 2017 at the age of 100. Irwin was born on December 30, 1916 in Warner, Alberta. Parents were Emily and Eugene McNeely. He is survived by his 2 sons Keith McNeely and Eugene (Jane) McNeely both of Lethbridge and 2 daughters, Brenda (Richard) Gesinghaus of Calgary and Roxanne (Dan) MacInnis of Calahoo; 14 grandchildren, 18 great grandchildren and 5 great great grandchildren. He is predeceased by his parents, 12 brothers and sisters, son Melvin, first wife Gladys and partner Lola Borysewicz. His wartime career started on July 19, 1939 when he left Lethbridge and went to Calgary for training. In April 1941, he was transferred to Medicine Hat and was certified for the Army on April 18, 1941. He was trained in the army for welding, woodworking, sheet metal and motor mechanics and his main job during the war was that as a motor mechanic working on trucks and tanks. He was transferred to Borden, Ontario and from there went to Halifax to transfer overseas by boat. He spent 3 weeks crossing the ocean where they landed in Scotland and went on to be stationed in Borden, England. From England, he was sent on to Sicily and then to Italy. He was a Private from 1941 and on May 15, 1945 was a craftsman in the Army. At the end of the war Irwin was sent to Holland via France and Belgium and then finally returned home to Lethbridge in December 1945. Upon his return, he went back to work for the family business, McNeely and Sons which eventually became McNeely Brothers, he worked for Eatons, Capital Furniture and then on his own in the floor covering business until he retired. He was a member of the Army Navy & Air Force Club for over 70 years. He will be forever remembered for his loving and caring nature and his own sense of humor. A Funeral Service will be held at 10:00am on Monday, January 23, 2017 at MARTIN BROTHERS RIVERVIEW CHAPEL, 610 4th St. South with Pastor Rodger Halvorsen, officiating.