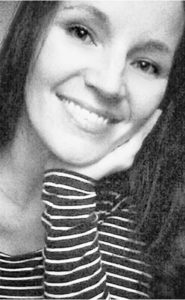 It is with deepest sadness that the family of Alisa Josephine Slager announces that she passed away on January 18, 2017 at the Rosedale Hospice in Calgary, AB at the age of 37 after a valiant two-year battle with cancer.

Relatives and friends are invited to Prayers and Tributes at St. Mary’s Catholic Church, on Sunday, January 22, 2017 at 6:00 p.m.

Funeral Mass will be celebrated at St. Mary’s Catholic Church (East of the James Walker Trail and Highway 22 intersection, Cochrane, Alberta) on Monday, January 23, 2017 at 10:30 a.m. Inurnment of Alisa’s ashes will be at the Wainwright Cemetery, alongside her Grandparents, at a later date. Condolences may be forwarded through www.mcinnisandholloway.com.

In lieu of flowers memorial contributions may be made to an RBC Cochrane Branch Trust Account that is being set up for Alisa’s Children or to the Canadian Cancer Society, 325 Manning Rd. NE, Calgary, AB, T2E 2P5. We love you Alisa. Rest in the Peace of the Lord.