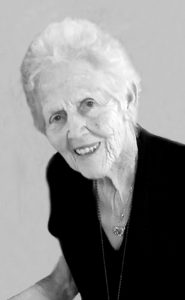 With broken hearts and great sorrow we say farewell to our amazing Mom and Grandmother, Irene Thompson. Mom began her next journey peacefully on Wednesday, January 18, 2017. Our Rene’s love for family defies description and is her greatest legacy. Her mischievous spirit and indomitable strength are her hallmarks. Mom was born on November 27, 1928 in Foremost, Alberta, where she and her twin brother Henry and sister Denie were born and raised. On March 14, 1952, Mom and Dad married, sharing 50 wonderful years of love and friendship. Mom was an active member of the Women’s Circle, Foremost Curling Club, and the Foremost United Church, where she taught Sunday School. She was the catcher for the ladies fastball team and when she returned to fastball in 1968 with the Taber Royals, she brought her trusty old pancake glove out of retirement and continued to play until she was 53. Mom served as the President of the Lethbridge Curling Club from 1973-1974 and the Lethbridge Ladies Fastball Association in 1979. Mom and Dad farmed north of Foremost until they moved to Lethbridge in 1961 with daughters Margaret (Maggie) and Heather. Son John joined the family in 1962 and completed our inseparable clan. We enjoyed many adventures exploring Southern Alberta, Northern Montana, and B.C.- adventures that continued with son-in-law Bob and grandsons Patrick and James. In our Rene’s later years, she continued to love her road trips with no destination in mind, just “to see what we could see”. Rene is survived by her children Maggie (Bob) Belisle, Heather (Don) Donison, John (Heather) Thompson; her grandchildren and great-grandchildren Pat (Jaelyn) Belisle, James (Mindy) Belisle and daughter Lia, Angela Donison (Ralph) and daughter Taylor, Don Donison (Kristi) and sons Wesley and Walker, Melissa Szalynski (Rich) and son Cameron, Lindsay Bueckert (Nigel); by her twin brother Henry Huisman (Marie); as well as numerous nieces and nephews. Mom was predeceased by her loving husband Jack; her sister Denie Vandenberg and her parents Bert and Gerrit Dena Huisman. Family is our Rene’s most valued treasure as she is ours. Her love and dedication to all of us was evident in all she did. We love you always and forever. Family and friends are invited to pay their respects between 6:00pm and 7:00pm on Monday, January 23, 2017 at MARTIN BROTHERS RIVERVIEW CHAPEL, 610 4 Street South, Lethbridge, AB. A Memorial Service will be held at 10:30am on Tuesday, January 24, 2017 at MARTIN BROTHERS RIVERIVEW CHAPEL. A private family inurnment will be held in the Archmount Cemetery.