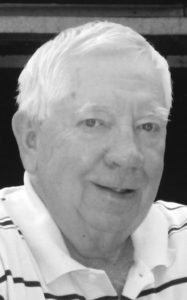 Ted was born in Taber, Alberta on July 3, 1933 to Theodore and Hazel Cook Haynes (deceased) and was the only boy of five children. Ted was raised and educated in Taber. He served an LDS mission in Australia where he was also able to proselyte by playing basketball for the “Mormon Yankees”. After he returned from his mission he married Sharon Frodsham from Cardston on August 14th, 1957 in the Idaho Falls Temple. He then attended BYU where he graduated with honors with a Masters Degree in Education Administration. He started his teaching career at Provo High and then moved his family to Magrath where he taught high school and was Vice Principal for 27 years.

Ted was very active in his community serving as President of the Southern Alberta Athletic Association, various capacities in the ATA, active in local politics serving on town council and numerous committees. He participated in the campaigns of several federal and provincial officials.

Ted was an avid sportsman. He enjoyed playing, coaching, and supporting sports. He loved golf and was instrumental in the development of the Golf course in Magrath. He enjoyed many hours with his friends at the senior center.

He served in many LDS church capacities and has a strong testimony of Jesus Christ.