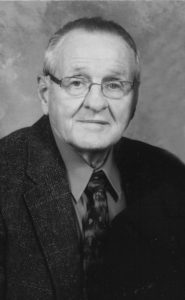 EVERETT “EV” TREMPNER, beloved husband of Constance “Connie” Trempner, of Lethbridge, passed away at the Chinook Regional Hospital on Monday, January 23rd, 2017 at the age of 84 years.

Ev was born in New Sarepta, AB in 1933 to Lydia and Leo Trempner, the second of three sons. He spent his early years as an agriculture mechanic and an auto body mechanic. Later he worked for J.I. Case, New Holland and eventually became store manager at New Holland, Edmonton. On December 17, 1960, Ev married Constance Mann and together, they began to raise their four children. In 1976, Ev moved his family to Lethbridge to pursue his dream of owning his own business, Evcon Farm Equipment, which is still in operation today.

Ev loved spending his time playing Oldtimer’s hockey, watching the “Canes” and could always be seen watching his grandkids at their various sporting activities. His teams were the Edmonton Oilers/Eskimos through and through.

He served on many agriculture boards but was especially proud of his 10 years on the Board of Directors of the Canada West Equipment Dealers Association. There he won their Merit Award as Dealer of the Year in 1995. Ev was also the dealer representative on the Alberta Government Farm Implement Board for many years, stepping aside at the age of 80 years. In all, he was active in the industry for over 60 years.

A day in his life involved him first, checking his stocks, then coffeeing with his buddies, working out at the “Y” and then golfing, when weather permitted. Ev was a car enthusiast and had many different cars throughout his life. He especially enjoyed taking his grandkids for a cruise.

Ev and Connie celebrated their 56th Wedding Anniversary in December. He loved his family more than anything and was so proud of our accomplishments.

“There are no good-byes for us. Wherever you are, you will always be in our hearts.”

Our family wishes to thank Drs. Galbraith and Smuts as well as the staff at St. Michael’s Health Care Centre (PARP) and the Chinook Regional Hospital, especially all of the nurses for their loving care of Ev as well as our family.

One Condolence for “TREMPNER, Everett “Ev””