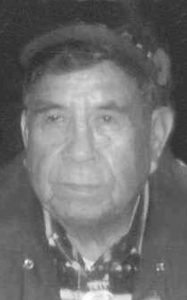 REGINALD (REGIS) JOHN BLACK PLUME – Kayippohpaataki, father, grandfather, brother, Uncle, brother In-law, and friend took his angel wings peacefully and walked through the gates of heaven on January 28, 2017 at the Foothills Hospital surrounded by family. He was 84. He was born on December 23, 1932 at the Blood Indian Hospital, Blood Reserve.

In 1939 Regis began his education at the St. Paul’s Residential School and then later years at St. Mary’s Residential School. At the age of 18 Regis entered the Army and fought in the Korean War from 1950 to 1951, and was a Peace Keeper in the Suez Crisis from 1956 to 1958. He was A. Coy – 3 Pl. 1st Canadian Division, 27 Brigade, 1st BN. Queens, Own Rifles of Canada. He was called upon at special traditional ceremonies and was honoured to capture many prominent people who were receiving their name or headdresses. He was also involved in organizing and partaking in the Armistice Day Veteran’s Pow Wow. Regis was raised by his grandparents and many spiritual leaders that he had the utmost respect for the native spirituality as he took a leadership role in the Sundance and was a participant for four years. He was also a devout Catholic attending church every Sunday. Regis was a well known Old Style Chicken Dancer until he was 76 years old and traveled to many pow wows throughout Canada and the USA with his sister Theresa and brother in-law Martin and Woodrow Good Striker Sr., whom he was very close with. With his traditional knowledge he was called upon as an Elder for the Standoff Elementary School where he told his stories and taught the boys chicken dancing. He was employed with various organizations; CJOC Radio Station, Lethbridge Herald, Kainai News, and various construction companies constructing buildings in Lethbridge and Calgary. He also served as a member/co-founder of the Magpie Society and a member of the Ninastako Cultural Society from 1980-1984. Regis was a player of the Lavern Broncos Hockey Team, and one of his proudest endeavours was writing a book called “Aapaiitsitapi”. In Regis retirement years he spent lots of time at speaking engagements for radio broadcasts and telling stories at the local schools. He enjoyed travelling and visiting with his friends at Park Place Mall, McDonalds & Humpty’s on Scenic Drive, at Bully’s Race Track, Dairy Queen in Cardston, and he loved visiting his sister Theresa as he knew he would get his favourite treat; boiled meat and fry bread. We will miss Regis’ great knowledge of the Blackfoot traditions and culture, his story telling, his presence at pow wows and family gatherings, his humble and quiet ways.