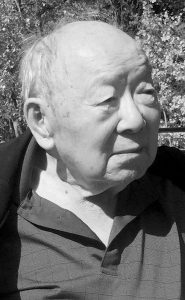 James Wataru Hironaka March 14, 1924, Raymond, Alberta – January 28, 2017 Calgary, Alberta. Jim Hironaka passed away quietly at the South Health Campus Hospital in Calgary, Alberta on January 28th, 2017, approximately 6 weeks shy of his 93rd birthday. He will be deeply missed by his family in Calgary who enjoyed having him nearby these past few years. Jim was born and raised on the family farm in Raymond, Alberta. After high school, he enjoyed time in Edmonton where he graduated with a Bachelor of Science degree in Agriculture from the University of Alberta in 1949 before returning home to work on the farm. He went on to work as a District Agriculturalist for many years before retirement. Jim also enjoyed serving many years on the Raymond General Hospital Board. In addition to treasuring his time with the grandkids, Jim enjoyed the outdoors with many years of fishing, hiking and later on gardening. Jim is survived by his loving children and their spouses, Jon and Mari Hironaka, their children Blaine and Allie, Mari Ann and Richard Lawson, their children Alicia, Michael, Ryan and Mark, Dean and Joelle Hironaka, and their children Angela Mower (Peter) and JT. He is predeceased by his wife Aya. Thank you to all the Doctors, Nurses, EMS, Walden Agecare staff and all of our family and friends for their support. A Memorial Service will be held at 11:00 a.m. on Friday, February 3, 2017 at the BUDDHIST TEMPLE OF SOUTHERN ALBERTA, 470 – 40 Street South, Lethbridge, Alberta with Reverend Y. Izumi officiating. Koden gratefully declined. Those who wish may donate to the charity of their choice.