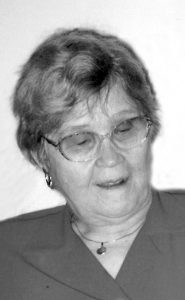 Mrs. Heronima Buszko of Lethbridge, beloved wife of the late Mr. Walter Buszko, passed away peacefully on Friday, February 3, 2017 at the age of 88 years. Heronima was born in Ogrodniki, Poland to parents Stanislaw Walinski and Stefania (Popko) Walinski on July 20 1928. She had three siblings Jadwiga (Antoni) Kulikowski, Gertruda (Czeslaw) Backiel, and Tadeusz – her brother who passed away shortly after birth. She met and married Wladyslaw Buszko on February 14, 1950 and had two daughters in Poland, Julie (Dale) Granlin and Teresa – daughter who passed away shortly after birth. In 1958, Heronima and her family immigrated to Canada and settled in the Lethbridge area. Life was tough at first, working sugar beet fields to make ends meet. Both Heronima and Walter would eventually work for Catelli and shortly later had their son Terry. Mama tried a few jobs but eventually settled in working at the St. Micheal’s and Lethbridge Regional Hospitals laundries as a seamstress. Heronima had a real passion for sewing at work and at home. Crochet and knitting was a hobby making many creations. Heronima and family would enjoy camping trips to the mountains with friends or fishing trips to lakes around Lethbridge Heronima was a cancer survivor. She went through a battle in 1987 and was cancer free for the remainder of her life. Heronima was always a hostess for family and friends, or anyone that would come to visit. You would never have an empty plate with all her home baking and cooking. True in polish tradition (and lots of leftovers). Mama would always have time to talk to, or visit with cousins that immigrated from Poland to Canada; Zygmunt Kulikowski (Calgary), Alina Kotynski (Edmonton), Malgozata Poskrobko (Calgary), Jolanta Soljan (New Jersey), Wojciech Backiel (Poland) and Godson Father Antoni Wasilewski (Poland) – a catholic priest; and numerous nieces and nephews. Also “furry grandkids” Mork, Bart, Presley, George, Lennie and Zoey over the years. Our Deepest Gratitude to all Caregivers, especially the Doctors and Staff at the Chinook Regional Hospital; the 5A GARU unit Edith Cavell Centre Home Care and Meals on Wheels for all your assistance. It is not a job you do, it is a calling. From the bottom of our hearts, thank-you. Vigil Rites (Prayers) will be held at 7:00pm on Friday, February 10, 2017 at MARTIN BROTHERS RIVERVIEW CHAPEL, 610-4 Street South, Lethbridge, AB. A Funeral Mass will be held at 1:00pm on Saturday, February 11, 2017 at ST. BASIL’S ROMAN CATHOLIC CHUCH, 604-13 Street North, Lethbridge, AB, with Father Kevin Tumback, celebrant. Interment will follow in the Mountain View Cemetery.