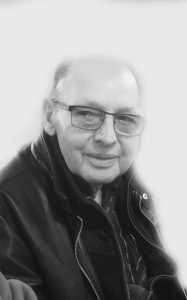 It is with a sense of great loss that we announce the passing of Art Mensch at Chinook Regional Hospital on Monday, February 13, 2017 at the age of 80 years.

Art was born on November 19, 1936 to Agnes and Friedrich Mensch in a Germanic immigrant community in the Ukraine, which at that time was part of the U.S.S.R. His childhood was filled with hardship, uncertainty, and political unrest. He was only 3 years old when World War II broke out and 5 years old when Germany invaded Russia. There were many times when his whole family feared for their lives as they were caught between Russian and German armed forces. Two brothers, Nick and Harry, were added to the family by 1943. In approximately 1943, the German army began to retreat back into Eastern Europe and allowed these Germanic settlers to accompany them. What followed next for Art and his family was five years in various refugee camps in European countries. Two more brothers were added to the family in those years, Fred who was born in what was then known as Yugoslavia, and Willie who was born in Austria.

During those years in the refugee camps, Art was responsible for much of the child care for the family. His father was completely missing for several years, and his mother provided for the family by working for various landowners and making handmade slippers and exchanging them for food, leaving Art responsible for looking after his younger brothers. When the family finally emigrated to Coaldale, Alberta in 1948, Art’s duties of caring for his younger siblings continued as his parents worked as much as they could for local farmers in the sugar beet industry in order to pay back their sponsorship debt and to establish their own home.

As Art grew to adulthood, he always worked and always provided for his family. He would do whatever it took to make a living, whether this might be working as a farm hand or driving a taxi cab. He and his brother Harry worked together for several years driving cabs, and had many an interesting story to tell about this. Later on Art worked a number of years for Kirk’s Tires, and then when an opportunity opened up to work for the Town of Coaldale, he felt that this would be a great job for him and enjoyed his employment there for 31 years right up to his retirement. Art was extremely committed to his career with the Town of Coaldale where he was known for his strong work ethic and dedication to performing his job to the best of his ability.

One of his favorite sports from a very early age was fishing. Art loved being outdoors, and could grow a great garden. He enjoyed music and formed his own country band which played locally for some years. As well, he and Dolores had many happy and memorable times camping in the mountains which he loved, something he looked forward to with each approaching summer. Art will be very sadly missed by his numerous friends and family members.

A Memorial Service will be held at 1:00pm on Thursday, February 16, 2017 at MARTIN BROTHERS RIVERVIEW CHAPEL, 610-4 Street South, Lethbridge, AB.