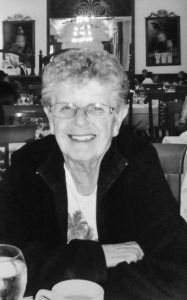 It is with great sadness to announce the passing of Violet Johnson. Left to mourn her loss Daughter Jackie (Keith) Grandchildren Timothy (Ashley), Jessica (Jared), Jennifer (Bob) and David. Great Grandchildren Brady and Kaelan. Pre deceased by her husband Samuel and daughter Debbie.

She was born in Ireland and did her schooling there. She met Sam, got married and had Debbie. Two years later they moved to Toronto Canada. Shortly after Sam’s job moved them to Kemano B.C. where shortly after Jackie was born. They moved to Prince George 4 years later. Her enjoyment to be around led her to a career as a swim instructor. She then moved to Hudson Hope where she became a teachers aide (substitute) and a waitress at the Sportsman Inn. Soon after she moved back to Prince George Her husband Sam passed.

Soon after She moved to Coaldale AB to be with her daughter Debbie. There she was able to help and watch her grandchildren grow up. In 2014 Debbie passed away. Two years after she moved back to Prince George to spend her last few months with Jackie.

She enjoyed many hobbies including cricket, badminton, swimming, crib, bowling, and shuffleboard. As well as watching many old westerns with Keith. She had a passion for traveling and slot machines. Whether it be on her tablet or at a casino.

She will be remembered for her outgoing spirit and her infectious smile. People enjoyed being around her because of her smile just made you want to be around her. She will be greatly missed.

There will be no service as per her request. In lieu of flowers donations can be made to the Prince George Rotary Hospice House. A place she was happy to call her last.